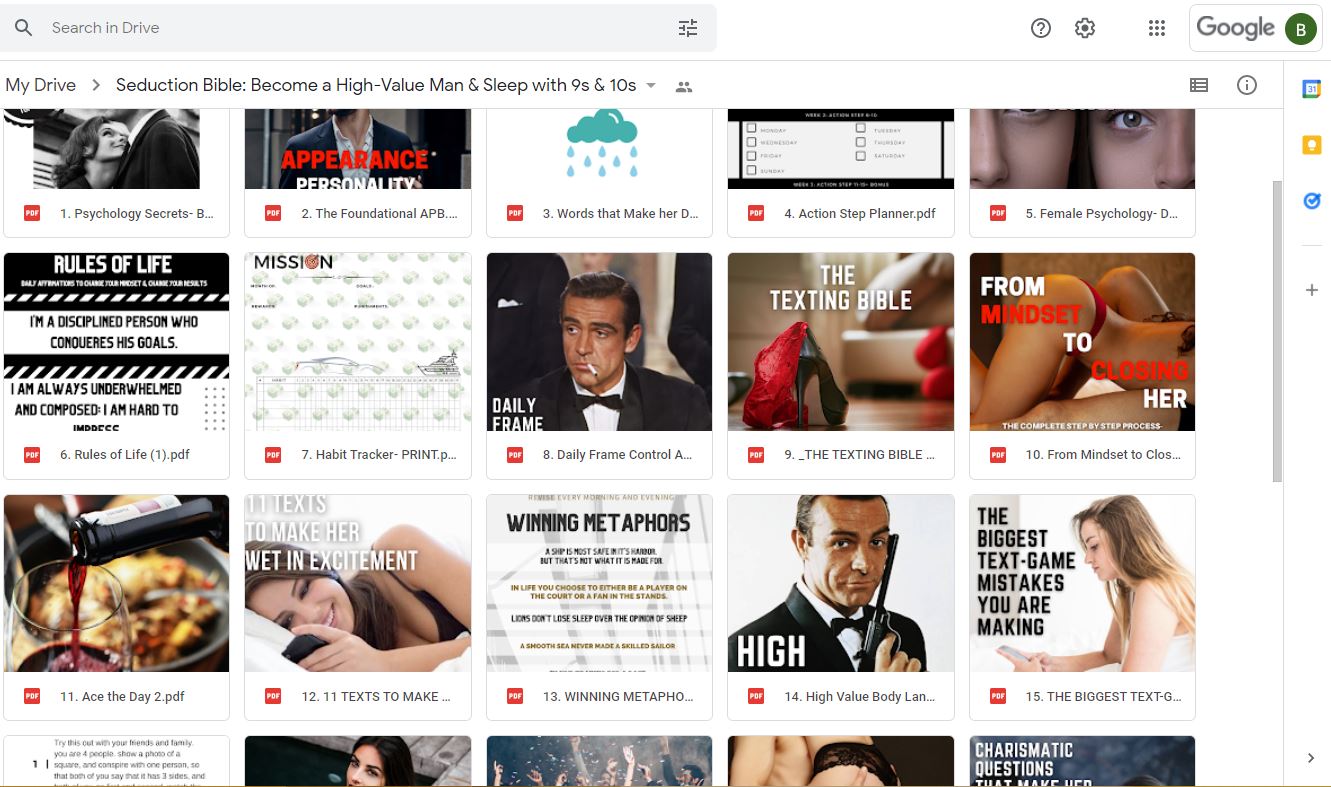 100+ Action-taking Men have used the Seduction Bible to Sleep with over 8908+ Beautiful Women (and counting!)

And Today – You Get Access To The Same Forbidden Hacks that allow you to effortlessly attract the kind of women you DESERVE, instead of settling for 6s and 7s like you have been.

I had two close friends back in high school.

Both were as good as the average guy in high school gets with girls- not very good.

However, they both found a girl and started dating.

Of course, they became too needy and attached to their girlfriends.

Unsurprisingly, both their girlfriends cheated on them.

They were devastated; almost suicidal.

But, one decided to learn Game and Seduction IMMEDIATELY (This guy had it worse- his girlfriend cheated on him with his best friend!)

while the other guy gave up and started doing drugs, playing video games, and god knows what.

I went to a different city soon after and we all lost touch.

But many years later, I ran into them on separate occasions.

The guy who learned Game & Seduction was in the BEST SHAPE of his life- Mentally, Financially, and Sexually.

The other guy who gave up?

He became fat, got married to an average woman who treated him like a slave. He couldn’t do anything either because he didn’t know how to attract any women- he became UNATTRACTIVE.

One used the pain as FUEL, the other merely DRIFTED into oblivion.

The reason I’m sharing this?

➤ You might’ve recently gotten out of a toxic relationship,

➤ or you want to bed that cutie in your high school/university.

➤ or you’re just a young man who wants to learn Game & Seduction to have options of women he can choose from.

➤ You could even be a Man in your 30s-40s wanting to explore the dating market again.

➤ Heck, you could even be a happily married man who wants to reignite the passion with your wife.

➤ You feel approach anxiety and don’t know what to talk about with women.

➤ You want to get out of the Friendzone.

➤ You struggle to respond to her Shit-Tests.

➤ You want to create an incredible social circle of high-value men and beautiful women.

➤ You want to DESTROY the inner introvert and become an extrovert.

➤ You are often unable to keep the conversation flowing.

➤ You *want* to have multiple women you can choose from.

➤ You want to move things forward with girls you’ve known for a while now.

➤ You are unable to escalate the conversation verbally & physically towards sex.

➤ You want to be sexual with women without coming off as creepy.

➤ You’re on a journey towards becoming a Desirable and Attractive Man.

➤ You want to take Action, but Don’t Know Where to Learn Game

If that resonated with you, Seduction Bible is EXACTLY the solution you’ve been looking for.

What if you could Destroy your Weaknesses and Learn to tap into Hacks that would get you Beautiful Women, Whenever YOU Wanted?

What Seduction Bible is NOT:

What Seduction Bible Is:

✅ This course has been designed to be Applicable IMMEDIATELY.

✅ My goal when creating this course was to make sure you get ATLEAST a 100x Return on your Investment.

✅ The FREEDOM Edition contains 28 GUIDES that will cover everything you will EVER need to become successful with Women, Wealth & DOMINATE your life.

✅ By Mastering Seduction, Attraction, and Game, you will get Beautiful Women and access to many high-value circles & opportunities Worth Millions of Dollars!

✅ Below is EXACTLY everything that Seduction Bible will teach you:-All 28 guides have been organized into these folders to make it easier for you to learn!

What Seduction Bible will do for You:

✅ This course will tell you EXACTLY what to do, and how often to do it.

Men have searched for 1000s of years for ways to make Women want to have sex and they’ve gone as far as Pheromones, Drugs, Chemicals, and you know all the stupid stuff that Disney taught guys to do.

And NONE of that Shit works AT ALL. In fact, it REPELS Women.

You have the choice of obtaining something that millions of Men, literally hundreds of millions of men have been searching for for centuries.

You have it right here.

There are no reviews yet.